Ronald’s birth was registered in Uckfield at the beginning of 1920, the son of Frank and Rosina Florence Holford, nee Basten. Several spellings of his mother’s names have been found while researching this page. She may have been called Marina Bestard, Besterd or Bustard.
Frank and Rosina were married in Portsmouth in 1912 and returned to Uckfield where Frank’s family came from. Their first son Harry James was born there in 1914. Harry and Ronald were their only children. There is an anomaly in Ronald’s age, as at his death in November 1941 the CWGC records he was aged 20.
In 1939 Frank, Rosina and Harry were living at the White Hart Shades Hotel with Frank listed as the manager and Rosina as the manageress. This was situated immediately to the East, and next door to, the White Hart Hotel in the High Street. Frank had been manager there for some time.

Ronald does not appear on the 1939 register and this would tie in with his joining the Navy aged eighteen in 1938. His naval papers are not available to view. His number, P/MX 61048 indicates that he was paid as from Portsmouth, the ‘M’ indicating he came into a group of miscellaneous ratings, and the ‘X’ that he was paid on the scale which was introduced in the mid 1930s. There is no ‘S’ in his number, indicating that this was not a short term or war time contract, but a career move.
It is known that Ronald was a Writer. He was responsible for legal and financial matters and the welfare of the crew. In wartime this could also have involved coding. Writers are ranked on a slightly different scale from other ratings. At his death Ronald was listed as a Petty Officer Writer. This is five stages up the ladder and would indicate he had a high degree of responsibility. Since he had just three years naval service he probably joined part way up which could indicate that he had previous work experience in this field. 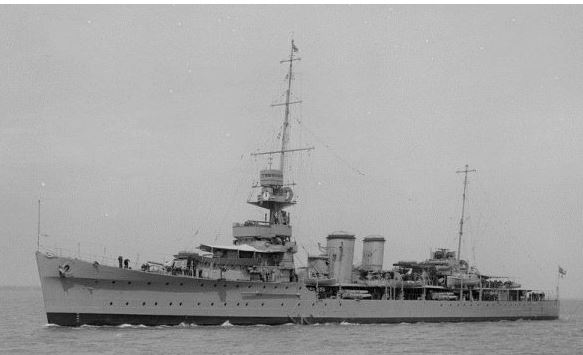 It is not known when Ronald joined the crew of HMS Dunedin, but almost certainly it was in 1940. She was a slightly ageing cruiser built in 1919, brought back into service at the start of WW2 and initially based at Kirkwall, for service on the Northern Patrol.
In January 1940 she took up station in Bermuda intercepting German vessels and being part of the blockade of Martinique. In September she returned to the Clyde for degaussing and to take on ammunition. On her return to Portsmouth she was involved on anti-invasion duty for three months before forming part of the escort for several troop convoys.

She left England for the last time on 08/04/1941 tasked with locating the German fleet oiler Lothringen. This had originally been used to supply the Bismarck, but following its sinking the code-breakers at Bletchley Park had located a search area in the central Atlantic.
HMS Dunedin intercepted the vessel and was able to board her and sail her to Bermuda. A search found important highly classified Enigma material in the wireless room which was sent back to the UK. Ronald would have been involved in all this.
From decrypted Enigma messages further German vessels were located and HMS Dunedin and two other cruisers HMS Devonshire and HMS Dorsetshire were sent to intercept them, but working independently.

In the afternoon of 24/11/1941 the captain of U-124 spotted the unescorted HMS Dunedin steaming a zig-zag pattern just east of St Paul’s Rock near Recife. The U-boat was spotted by a look out at 14:50 hrs as she dived for a submerged attack. The HMS Dunedin altered course but due to some damage, control was difficult.
She was again spotted by U-124 at a distance of three miles, well outside its preferred attack range. However the German captain fired a spread of three torpedoes at 15:21. They took over 5 minutes to reach the cruiser, which was hit by two of them. The first torpedo struck amidships and destroyed the wireless station, the second near the officers’ quarters. She sank in just seventeen minutes.
Of the 486 men on board, only 67 survived and reached Trinidad on board an American merchant vessel which had picked them up three days after the sinking. Ronald’s body was not found.

Ronald is remembered on  the Naval Memorial at Portsmouth on panel 57 column 2,  as well as the Memorial at St John sub Castro, the Lewes War Memorial, and in the Memorial Chapel in the grounds of The Priory School,  Mountfield Road.