Wallace Syril Card was born in 1910, and baptised at St John sub Castro on 04/09/1910, the son of William Arthur and Ruth Card, nee Russell. They had married at Chiddingly in 1901 and moved to Lewes. Wallace was their fourth child of seven born between 1902 and 1924, although one had died before 1911. In 1911 the family were living at Ivy Cottage, St John Street and William was described as a labourer.

It is known that the Card family attended St John sub Castro, and  that  by  the  mid  1930s  they were living at 56, North Street. William worked for Beard’s brewery in Fisher Street as a cellar man. Both Wallace’s parents were actively involved in the local British Legion, his mother in the women’s section and his father as assistant secretary.
In September 1934 William’s body was found in the river near Lewes. The inquest into his death found that he had committed suicide while worried about the British Legion finances. There was no suggestion that money was missing, just that William was ill-equipped to deal with them. Ruth died just two years later. Her funeral was at St John sub Castro and she is buried in the cemetery. The only member of Wallace’s immediate family to remain in Lewes was his brother Henry. In 1939 he was living in Manor Terrace at The Course.

Wallace had married Gwendoline Emma Greenaway at St John sub Castro on 21/04/1934. At the time Wallace was working as a solicitor’s clerk. Gwendoline lived in Edward Street. They had two children, both born in the Hailsham district and by 1939 Gwendoline and the children were listed at 79 Vale Road Seaford. Wallace’s sister also lived in Seaford.

Wallace is known to have been part of the HQ Company of the 7th Battalion, the Royal Sussex Regiment, and numbered 6395628. The HQ company was 120 strong. Following a decision to double the size of the Territorial Army the 7th Battalion was formed in Brighton on the outbreak of war from men from other Battalions, and with the infusion of untrained men.
Bearing in mind Wallace’s rank when he died a year later it is likely that he was already a member of the 5th Battalion, which was based in Lewes, and that he was transferred to the 7th. Wallace was the Company Quarter Master Sergeant. His CSM was John Bell whose name also appears on the Memorial at St John sub Castro. 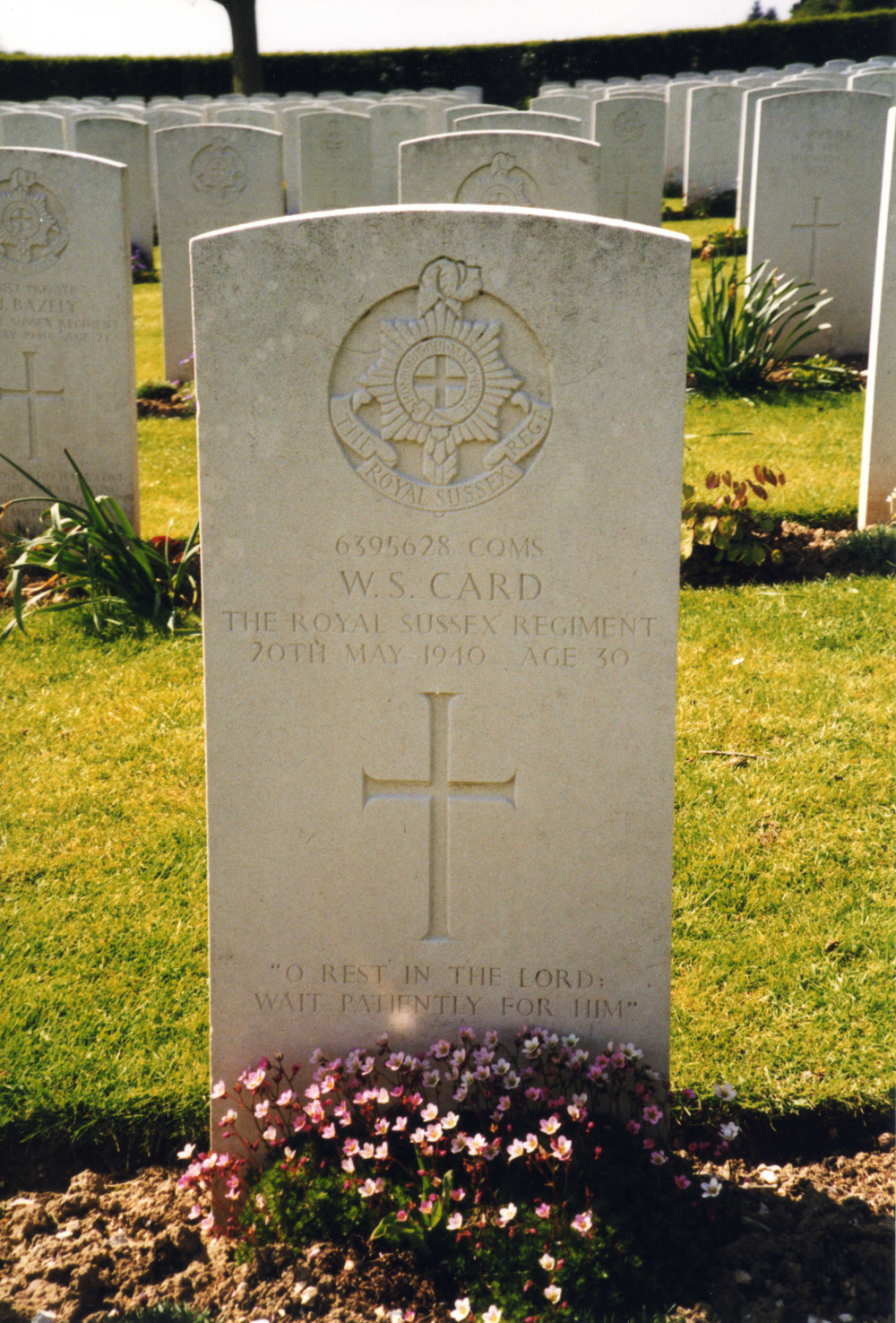 Initially the role of the 7th Battalion was to guard vulnerable places and train its newly drafted men. They were lightly armed and equipped, and in April 1940 were sent to France, being based near Rouen. For details of the action where Wallace was killed please read the notes about John Bell.

As outlined on that page this was a very confused period. The regimental diaries were lost at the time so accurate details are scarce. Wallace was initially reported as missing; however a later casualty list notes that he was killed in action on 20/05/1940.

Wallace is buried in the Abbeville Communal cemetery Extension in Plot 9 Row E grave 13. He is remembered, with all Royal Sussex Regiment soldiers who have fallen, in St George’s Chapel in Chichester Cathedral.
He is additionally remembered on the St John sub Castro Memorial and the Lewes War Memorial.