George was born in Bolton on 17/11/1910 and baptised at St Mary’s Bryanston Square, Westminster by his uncle the Rev E W Ormerod, then curate of Portsea. His father, George Milner, was a captain in the RFA at the time. He went on to serve during WW1 rising to Lt. Col. and being awarded the DSO. George’s mother, Mildred Grace Ottley had been born in Leinster and the couple had married in India in 1909.

George was educated at Rugby school leaving there in 1928 before going up to Queen’s College Oxford from where he graduated with an MA Oxon. in 1932. Following his father’s death his mother moved to Bassett Road, North Kensington. George, his brother John and Mildred appeared there on the voting registers in 1938. His brother Patrick had joined them by 1939.

George married Madeleine Gabrielle De Pury in Wantage in 1941 and a daughter Susannah was born a year later. George does not appear on the 1939 register as he had been embodied into C Battery of the Honourable Artillery Company on 01/08/1939. He was numbered 113691 and sent to the OCTU the following day.
He was commissioned as a 2nd Lt RA on 12/01/1940 and it is this rank which appears on some of his records.
We cannot be certain when he entered France but family papers state that he was wounded at Dunkirk. He was transferred as a temporary captain to the 12th Regiment on 26/06/1941, and at his death was part of 232 Battery of 67 Medium Regiment RA. Papers for all these regiments are still officially closed and access is denied. 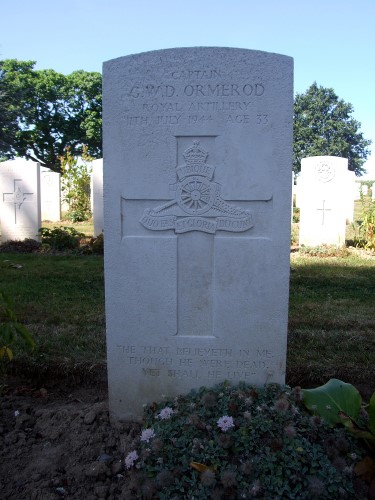 What is certain is that George was killed in action on 11/07/1944 near Calvados. He was initially buried near Fontaine Etoupfour.
After the war those buried at this spot were exhumed and re-interred at the St Manvieu War Cemetery in Cheux where their graves could be maintained in a proper manner.
George was re-interred on 22/11/1945 and is in plot IX C 18.

George is remembered on the 91 and 139 Field Regiment RA Memorials at St Swithuns, Hither Green as well as on his father’s gravestone at St John’s.

This can be seen on the link:
https://www.stjohnsubcastro-history.org/wp-content/uploads/2021/10/Memorial-Images-with-Inscriptions-603A-679.pdf
(Scroll to Memorial number 627)