Francis Carpenter, known as Frank, was born in Fulham on 02/01/1910 to Frederick and Ellen Carpenter nee Locke. Francis was their first child. Within a year of his birth the family moved to Yapton near Arundel, where Frederick was recorded on the census as a market gardener working in the fruit tree and shrub business.
Two further sons were recorded as born in Yapton in 1912 and 1914; however Francis attended Walberton school from 07/04/1913, with his father giving their address as The Green, Walberton.
They seem to have moved within the next fortnight, as also at the school was Mabel Snell from London, who entered on 25/04/13. Frederick was listed as her guardian, and she was recorded as living in Walberton for her health.
She seems to have recovered very quickly, and returned to London within a month. On her entry record the Carpenter’s address was given as Mill Lane. Frank’s attendance at the school was also brief, as he left on 30/07/1913 with his record marked as ‘gone away’.

Frederick had previously been a Royal Marine and a member of the Hong Kong Police and in 1917 he was recalled to duty. He asked to be sent to the Inland Waterways Transport section but seems to have been assigned to the Labour Corps. His address at that time was Myrtle Cottage, Easebourne. Frederick’s recall was short as he suffered from leg ulcers. He gave his demob address in 1919 as 5 Ridgemount Villas, Montpelier Road, Sutton.
At some point between then and 1939 the family moved to Lewes. Frederick and Ellen were recorded on the 1939 register as living at 28 Mount Harry Road, with Frederick described as a disabled gardener.

In the meantime Frank had married Emily Agnes Sales. They married in the first quarter of 1936 in the Uckfield district. Emily had been born in late 1913 in the East Grinstead area. In 1939 Emily was recorded living on her own at 5 Sun Street. By February 1941 she was living at 5 York Street. A bombing raid in 1943 and subsequent rebuilding has changed this area completely.

Frank joined 210 Field Company of the Royal Engineers on 01/02/1939 as a sapper and was numbered 775542. 210 Company was known as the Sussex Field Company, recruited locally and fundamentally a Territorial company expanded in the push to double the Territorial Forces. They recruited in Harrow, Queen’s Hall Seaford, Lewes and Newhaven.
Following the Munich crisis they were mobilised from Lewes, moving to Beaminster in September 1939 for training. Frank was probably promoted to Corporal around this time. 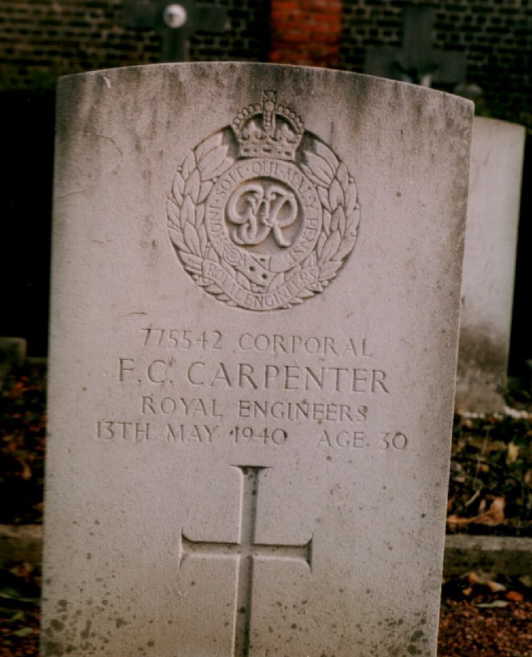 On 08/04/1940 210 Company left the UK, arriving in Cherbourg, from where they advanced towards Belgium. Their primary role was to prepare bridges for demolition, aimed at halting the German advance. Fighting was fierce; the Germans broke through the lines and 210 Company were ordered to retreat.
Frank was eventually reported missing on a casualty list, but his death was not officially reported until August. His death is recorded as ‘killed in action’ on 13/05/1940. However his probate says that he was killed on active service sometime between March and July 1940.
The Crawley and District Observer for 20/07/1940 says that his mother-in-law, then living at Coleman’s Hatch, had received news of his death. Clearly events just prior to the evacuation of Dunkirk were confused.

Frank is buried in Oudenaarde Communal Cemetery in Grave 37 and is remembered on the St John sub Castro Memorial and the Lewes War Memorial.

Emily subsequently remarried and survived him by 50 years, dying in Brighton in 1990.