Eric was born in Chatham on 12/06/1919, the son of Wallace William and Emily Cork nee Simmons. His parents had married in Strood Kent, Wallace’s family home, in 1913. Eric was their only child.
Wallace was a toolmaker, and the family moved to Lewes some time between 1919 and 1931. Emily died in Lewes in 1931 and Wallace remarried, Ivy A Davey, in West Ham two years later. They lived at 7 The Fosse, Lancaster Street and it would seem logical that they worshipped at St John sub Castro.
In 1939 Wallace and Ivy, plus one other person whose entry has been redacted, were living at 7 The Fosse, and Wallace was described as an engineers’ pattern maker. It is very likely that the redacted record is for Eric.

Eric joined the Royal Navy and was numbered P/SD/X 1502. The ‘P’ denoting that he was paid as from Portsmouth, the ‘S’ that this was a short term contract, probably 7 years, and the ‘D’, almost certainly that he was a submarine detector. The ‘X’ meant he was paid on the pay scale which came into force during the mid 1930s.
It is known that he was attached to HMS Celandine in late 1941; however since his naval papers are not available it is impossible to be certain where he was before this, or when he joined.
HMS Celandine was a flower class corvette launched in 1940 and used primarily as escort for the Atlantic convoys. She was very manoeuvrable and would have carried the ASDIC submarine detection equipment. 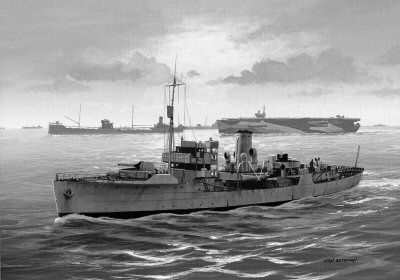 All the Atlantic convoys can be traced, and Eric’s last trip would  have  been  from  Loch  Ewe  to  Halifax  in Canada. HMS Celandine ‘picked up’ the convoy on 27/11/1941 as it left the UK and escorted it to Halifax. She left the convoy on 06/12/1941 when it was in safe waters, and sailed to St John’s Newfoundland where she docked and refuelled.
Her next convoy did not leave until 03/01/1942 so the crew would have had some leave over Christmas. Eric was known to have gone ashore on Christmas Day. The local newspaper, the Corner Brook Western Star, reports that he fell from the gangplank of a steamer at the premises of Baine Johnston and Co. Ltd. They were importers, ship owners and general merchants.

An all day search was carried out but he was not found. This is also where some confusion occurs.
The paper reported that Eric was a member of the Merchant Marine, presumably since he fell from the gangplank of a merchant vessel. His body was eventually found ‘near Fort Pepperrell, in the harbour’ on 11/04/1942 and he was buried the following day.
The death register from St John’s Newfoundland notes his death as ‘accidental drowning’ on 25/12/1941, and as an AB from HMS Celandine and RN, giving his official number as identification.
He was buried in the St John’s Anglican Cemetery in plot 24 section D grave 6 where there is a CWGC headstone.

He is additionally remembered at St John sub Castro and on the Lewes War Memorial.