We believe the information on Charles Simmons, below, to be correct but he has been a particularly difficult man to trace. This man is the only Charles Simmons with any local connection that has so far been found. If you can add anything further we would be pleased to hear from you, in particular what his connection with St John sub Castro may be.

Charles was born in Godstone on 18/12/1916, the eldest son of Charles Edward and Charlotte Ellen Simmons, nee Brooker. In some records he has a middle initial F but at this stage we do not know what the ‘F’ stood for. His father was born in Chailey and his mother in East Grinstead. Following their marriage they lived for some time in Surrey where Charles snr was a grocer and provisions dealer. He became a Master baker and by 1939 they were living and working in East Grinstead. Charles was listed as a baker’s roundsman, presumably for his father. 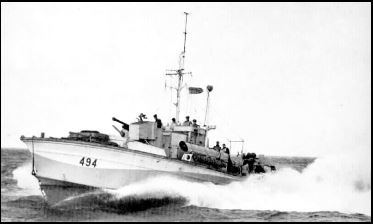 Charles was called up for service during WW2 and joined the Royal Navy as a stoker numbered P/KX 153796. The ‘P’ indicating his home port was Portsmouth, the ‘K’ that he was a stoker, and the ‘X’ that he was paid on the new pay scale that came into force in the 1930s.
We do not know what vessels he was on until April 1945 when he was listed on HMMTB 494 (His Majesty’s Motor Torpedo Boat 494). Interestingly this was a petrol powered vessel so presumably his role, and that of the leading stoker and Petty Officer mechanic, was simply to make sure the engine was running correctly.

The Motor Torpedo Boats were small and very manoeuvrable, but with a good turn of speed when necessary; they were also difficult to detect by radar.
Their first use was as part of the small scale raiding force (SSRF) set up in 1940. Initially they made what was described by Churchill as ‘pin prick’ raids against coastal defences and installations along the Channel. Churchill felt that these raids would keep the Germans in a state of nervous vigilance and lead to them deploying purely defensive resources.
Lord Mountbatten was the first commander of the SSRF but control was shared between the Navy and the Special Operations Executive (SOE). The SOE used the vessels, amongst other things, to deliver and retrieve spies from occupied territory, gather intelligence, and take prisoners. Later in the war their role changed slightly.

MTB 494 was based at Lowestoft and formed part of the 22nd MTB flotilla. She was 75 feet long, powered by a petrol engine and with two torpedo tubes. Other light armament was also carried. Ordered in 1943 and commissioned the following year she was one of 90 that were built, of which just 12 were lost during the war.

On 07/04/1945, in the last battle of the war between German e-boats and the MTBs, MTB 493, 494 and 497 intercepted a group of German e-boats, from 2 Schnellbootsflotille off Smith’s Knoll near the Norfolk coast.
In the ensuing fight S-176 rammed MTB 494 at 02:12 hrs and she almost immediately turned turtle and started to sink. Just three crew members managed to escape from the vessel and cling to the upturned hull. MTB 493 was badly damaged by S-177 but managed to pick up the survivors. S-176 and S-177 were both damaged in the action and were later scuttled by their crews. While some bodies were recovered for burial Charles was not one of them.

He is remembered on the Naval Memorial at Portsmouth on panel 89 column 3 as well as on the St John sub Castro Memorial and the Lewes War Memorial. He is not listed on either the Uckfield or East Grinstead Memorials.

Following his death Charles’ parents placed a notice in the Sussex Agricultural Express thanking people for their messages of sympathy and referring to Charles as Charlie. They gave an address in Hempstead Road, Uckfield. One source suggests that Charles may have lived at 16 Talbot Terrace but this cannot be confirmed.