Richard was born in Camberwell on 17/12/1917 the younger son of Frederick George and Rose Gladys Wares, nee Mecklenburgh. Frederick had been born and brought up in Lewes at Mount Pleasant until his marriage in 1912. On his marriage certificate he gave his occupation as corn merchant but when he enlisted in B Company of the 3rd Battalion the Royal Sussex Regiment in 1915, while still living in Hampstead, he said he was a labourer. He was invalided out of the services just over a year later. 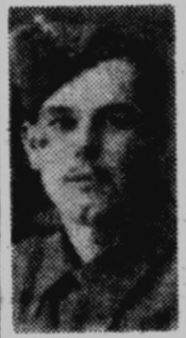 Richard, as printed in the Sussex Agricultural Express

From the birth dates of their children we can work out that Frederick and Gladys returned to Lewes between 1917 and early 1925 and lived at 1 Meridian Road, Landport. Frederick died in 1935.
Richard attended Pells school and by 1939 was working for East Sussex County Council as a road labourer. Shortly afterwards he moved to work for Southern Railway.

According to the Surrey Regimental Rolls Richard enlisted in the 1/5th Battalion the Queens Own Royal Regiment (West Surrey) on 17/01/1940. He was numbered 6094013. The 1/5th were a first line territorial force who, with the 1/6th and 1/7th Battalions formed part of the 131st Infantry Brigade. In turn this was part of the 44th Home Counties Infantry Division.

Richard arrived in France in 1940 as part of the BEF but following the disastrous losses suffered by the British army the battalion, along with nearly 350,000 men, were evacuated from Dunkirk.

After a period of regrouping they were sent to North Africa in 1942,   fighting   with   the   8th  Army  at  Alam  El  Haifa  and  El Alamein. 131 Brigade became the Lorried Infantry Brigade of 7 Armoured Division, the ‘Desert Rats’.

From there the battalion was posted to Italy. They were part of the capture of Tunis in May 1943 and were then involved in the landings at Salerno. Fighting here was particularly fierce, some of it resembling the trench warfare of WW1. The battalion moved northwards towards the Garigliano river, where the German forces had a strong defensive line set up.

Richard is remembered on both the St John sub Castro Memorial and the Lewes War Memorial.