Leslie was born in the Horsham district in 1919, the son of William Ashby and Lizzie Maria Turner, nee Wales or Walls. Very little can be found about Leslie’s early life except that he attended Pells school and was a runner.
His father seems to have disappeared from the family home some time in the 1930s and he was not living with them in 1939. At that time the family lived at 15 Talbot Terrace.
Leslie’s wife to be, Ellen Amelia Finch, was working for the Young family who lived at 17 Abinger Place, and they married at the end of 1939. 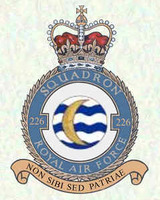 It is not certain when Leslie joined the RAFVR. Since he was a Sergeant Wireless Operator and an air gunner when he died in mid 1940 it is likely that he had joined well before the start of WW2. He was numbered 751657 and joined 226 Squadron.
226 Squadron had been reformed at RAF Upper Heyford in 1937 and flew Fairey Battle I light bombers. At the outbreak of war they formed part of the Advanced Air Strike Force, which in turn was part of 1 Group Bomber Command.

By agreement with the French, AASF moved to France in September 1939 and until May 1940 were based in the Reims/Champagne area.
On 16th May they moved to Faux-Villecerf where they remained until 15th June. They had suffered very heavy losses while stationed in France and were evacuated from Brest in mid-June.
Information on the AASF is still being published and the latest currently available (September 2019) shows that Leslie was part of one of their last operational flights in France. His aircraft was one of 6 in the flight and he was flying a Fairey Battle I, code number P2161 with the call sign MQ-??

He took off from Artins on 13/06/1940 with a pilot, a sergeant observer and himself as wireless operator, air gunner. Their task was to attack troop convoys at La Chapelle-Veronge.
They were intercepted by either an Me 109 or Bf 109 and shot down at 20:10 crashing near La Chapelle-Moutils, around 30 km NNW of Provins.
The Air Ministry report into the incident shows that Leslie and the sergeant observer were killed but the pilot escaped and was able to return to his unit.

Leslie is buried, with his observer, at La Chapelle-Moutils Communal Cemetery. He is also remembered on the International Bomber Command Centre on phase 3 panel 256.
Locally he is remembered on the St John sub Castro Memorial and the Lewes War Memorial.