You are here: Home>People>Dedications>George Mackenzie Bacon and Walter Charles Bacon 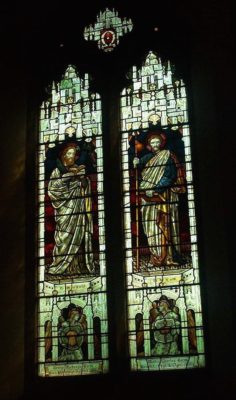 George Mackenzie Bacon (1835-1883) Son of George Peter and Hannah Bacon. He and his younger brother, Walter Charles are listed on the 1841 Census aged 5 and 4 with their Grandfather, Richard Mackenzie Bacon, ‘Printer’, and his second wife Margaret, in the village of Costessey, Norfolk. He went on  after medical school to become a specialist in psychiatric medicine at Fulbourn Hospital, Cambridge. The new hospital unit is named after him.

The quatrefoil window at the top shows the Greek symbol ‘Omega’ meaning ‘The Ending’ or final part.

Text: ‘To live is Christ’ (Philippians 1)