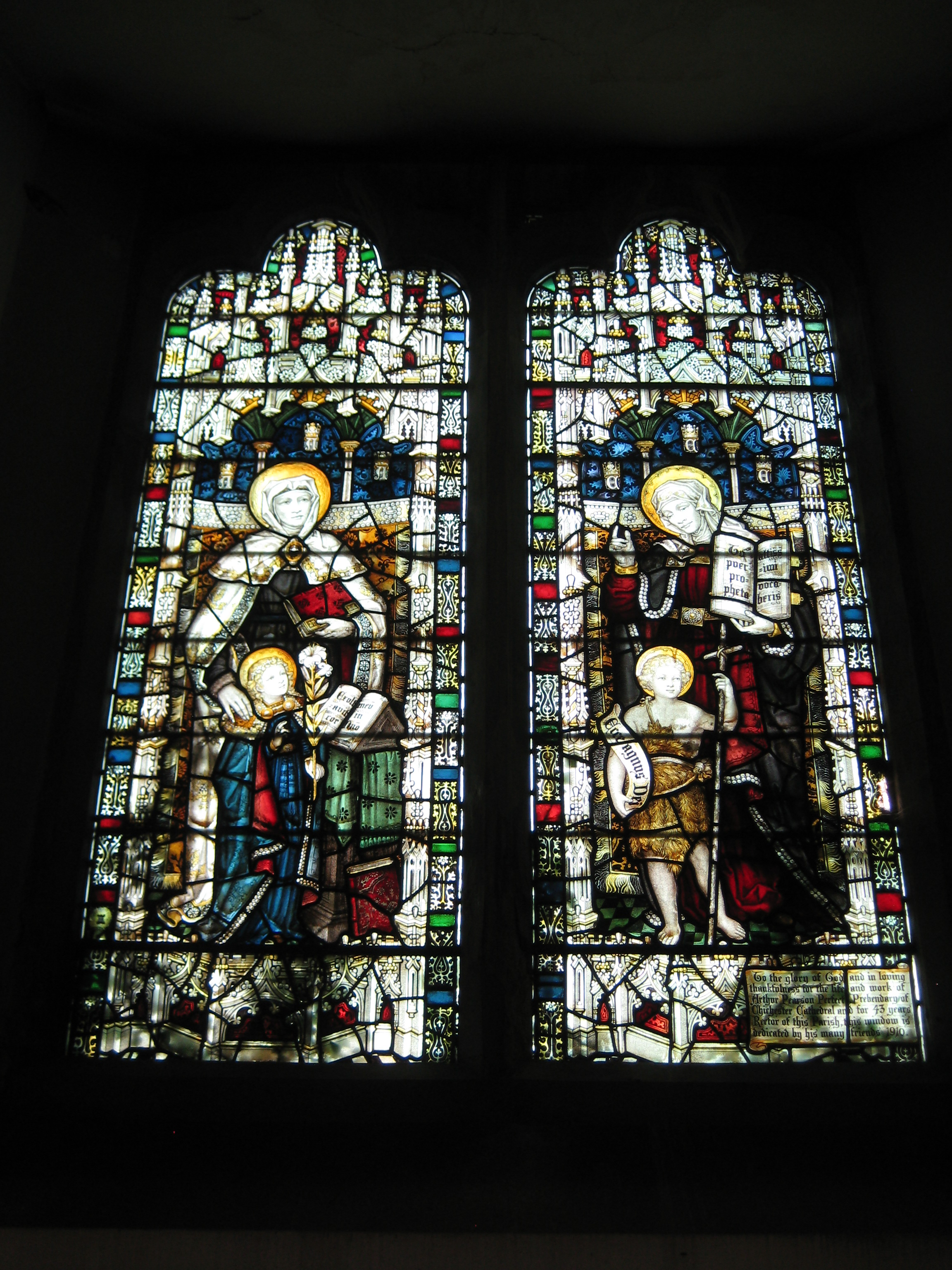 The windows  show the Virgin Mary with Jesus holding a lily, both richly robed, and St Elizabeth  holding an open book, with John the Baptist as a boy wearing a camel hair skin and holding a wooden staff.
The windows were likely to have been designed by J W Lisle, designer and chief draughtsman at the firm of Walter Tower (1873-1955), who took over the business of Charles Eamer Kempe (1834-1907)
His ‘signature’ of a small black tower superimposed on a wheatsheaf can be seen on the window bottom left. Kempe, who was born in Sussex, was a prolific stained glass artist .

From the Obituary in the Sussex Express   February 11 1910
‘‘In times of sorrow he comforted his people, and in their joys he heartily participated. His geniality was an outstanding characteristic, and long will it be remembered by those who knew him’. He took a keen interest in the local schools, Choral Society and other organisations in the public life of Lewes.
During his time, the church interior was transformed. A new pulpit, new ceiling, new pews and the chancel were added. The West gallery, which formerly accommodated the choir, was removed. An excellent organ was installed. The church schools of St John’s and The Pells  were also built . He earned the name of the ‘perfect’ Rector!”
His wife, Fanny Maria (1838-1897) was a daughter of Revd Arthur Gore Pemberton, vicar of Kensal Green.


‘To the Reverend Arthur Pearson Perfect, Rector and Rural Dean. The past and present members of the congregation of the parish church and others, tender you their hearty congratulations on the completion of 25 years’ service as Rector and they take this opportunity of offering you the accompanying purse of one hundred and fifty sovereigns as a practical recognition of such long and faithful services and as a testimony of their sincere regard and esteem. They trust that you may long be spared to labour in their midst, and that they may have the benefit not only of your spiritual ministrations but of your valued friendship.
Signed on behalf of 525 subscribers
Reginald Blaker, James Pelling (Churchwardens), John C. Lucas (Treasurer), Edward Bedford, W A Pollard (Hon Secs).
St Thomas’s Day 1892
(Sussex Express, Dec 24 1892 FMP British Newspaper Archive)

Jeremy Goring, in his book ‘ Burn Holy Fire: Religion in Lewes since the Reformation’. Lutterworth,2003. p122-3, writes the following:
‘The Victorian period, which saw Nonconformists playing an increasingly important part in the social and religious life of Lewes, also witnessed a remarkable revival in the fortunes of the Church of England.
This had something to do with an improvement in the quality of the parish clergy…  and, for the first time for centuries, every parish in Lewes had its own resident rector. They were for the most part dedicated men, content to stay in one place and serve their cures conscientiously  all their days.
The later years of Victoria’s reign saw some remarkably long incumbencies. Augustus Parsons was at St Anne’s from 1863 to1898  William Richardson at Southover from 1869-1900, and Arthur Perfect at St John sub Castro from 1868- 1910. Perfect, who died in harness at the age of 71, was evidently a model parish priest.
For most of his time at St John’s he had no curate to  assist him in what was then  described as ‘the largest  and also the poorest parish in Lewes’ .
During his 42 year incumbency there were  2530 baptisms , 2070 burials, and 532 marriages, at most of which he  himself officiated. ’He did his duty simply and faithfully, unostentatiously  and quietly’. ‘Zeal’ and ‘earnestness’ were his characteristic qualities and his sermons were remarkable for their ‘breadth  of view and intense human sympathy’.He was ever a man among men and behind a courtly bearing were a warm heart and not a little humour’.*
From the things said about him at his funeral, it sounds as though Parson Perfect lived up to his name.

For the full obituary of Revd. Perfect, click the link below and open in Downloads.