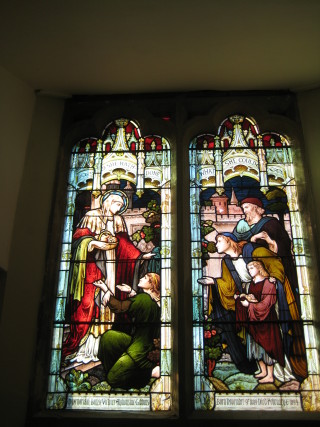 These two windows are in memory of
Louise Victoire Alphonsine Gibbins (1809-1894)
wife of Henry James Gibbins (1803-1877)
Across the top of the windows is a quotation from St Mark’s Gospel, chapter 14 verse 8:
‘She hath done what she could’ (King James version)
These are the words Jesus used when Mary the sister of Martha generously anointed Jesus’ head with expensive oil, at a meal Jesus had with his friends two days before the Passover.
The disciples chastised her for wasting the oil rather than selling it and giving the money to the poor, but Jesus praised her for honouring him –
“for the poor you will always have with you, and you can help them any time you want. But you will not always have me.
She did what she could. She poured perfume on my body beforehand to prepare for my burial”.
This could be a reference to the fact that Jesus knew he was going to be crucified as a criminal – and it was not the custom to anoint the body of criminals after death.
The  windows shows a female saint, richly robed, offering food to needy people. Some have suggested that this might represent Dorcas, a woman full of good works, who is referred to in Acts Chapter 9, verses 36-43.

Made by ‘Savill, Albany’ (etched on window) later became A Savell & Co 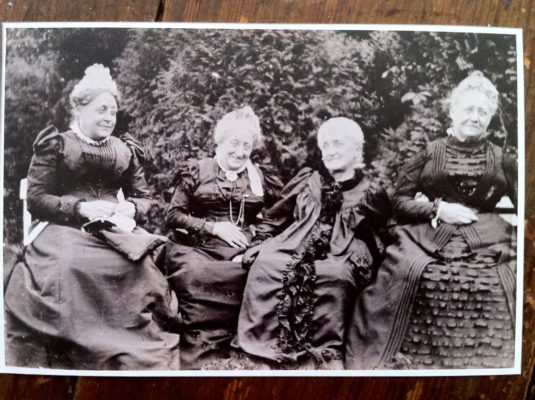 Marchand,  a perruquier  (wigmaker) in Orleans, she may have met Henry in Paris at the Eleve de M. Nardin. Her brother, Isidore became hairdresser to Queen Victoria. The family set up in business in Mayfair.

5 ? daughters were born to them. Adele V (known as ‘Little Grandma’) m. James Uridge. Their daughter, Adele Alphonsine  m. George Holman. Both have memorials in the Church.

Help with identification of these ladies above , described as the ‘Gibbins Girls’ would be welcome.