You are here: Home>People>Dedications>Henry James Gibbins

These two windows are in memory of Henry James Gibbins (1803-1877). They both draw from the parable of the talents, recorded in Matthew’s Gospel, chapter 25 verses 14 – 30. The windows were made by ‘Savill, Albany’ (etched on the window)  which later became A Savell & Co.

Curiously, the parable appears to have been misunderstood by the designer of the window, because the presence of the spade clearly identifies the subject of the window as being the kneeling figure of the servant who buried his one talent in the earth and was roundly condemned by the master for doing so. Thus the text “Well done thou good and faithful servant” would appear to be entirely inappropriate! Unless there is another interpretation?!

The right hand window draws from the same parable and shows the Lord commending the servant with the words  “Enter thou into the joy of thy Lord”.
The intention of both windows was clearly to portray Henry James Gibbins as having used his talents to the full, thus deservedly being commended for being a good and faithful servant who would therefore have his reward of entering into the joy of the Lord.
We can only speculate as to whether the error was spotted at the time!

Henry James Gibbins trained in Paris as a hairdresser, wigmaker and perfumer, where he may have met is future wife Louise Victoire Alphonsine Marchand (1809-1894), who is commemorated in a window to the left of this one.

On completion of his training in Paris, he returned to London and set up in business at 7 King Street, St James’. The trade card shown below is in the Fitzwilliam Museum, Cambridge.

From the King Street premises he marketed his own ‘Cream of Roses and Rosemary’ hair restorer. He also dealt in materials for embroidery and tapestry making, as well as paintings, watercolour drawings, plate china, linen, musical instruments, books, and wines. 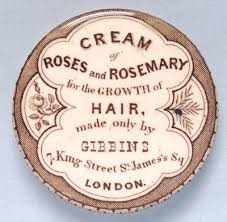 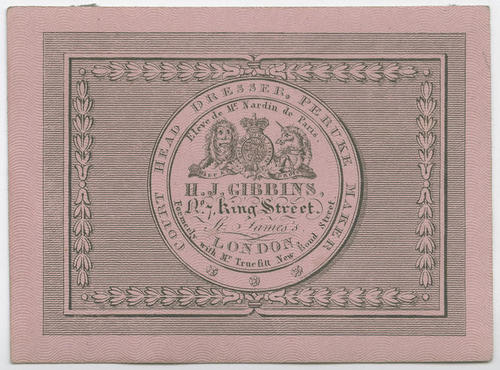 In his retirement he was a prolific watercolourist, producing many paintings. These included rural landscapes, and architectural studies in Britain and abroad, which were inspired by his travels. 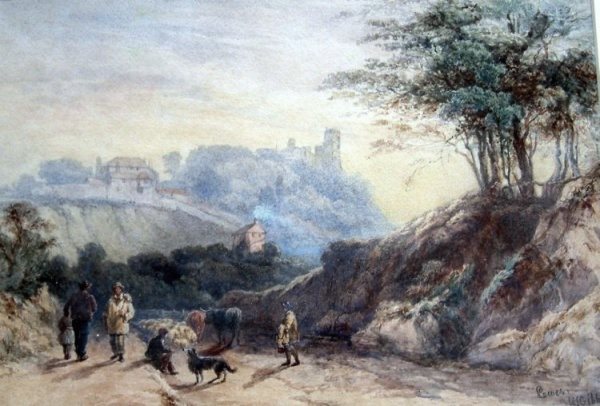 Painting by Henry James Gibbins. We wonder where this was painted from . . .

This painting by Gibbins is of the Castle in Lewes. Although he himself never lived in Lewes, one of his daughters, Adele, married into a local family.

It is interesting to consider which road the track in the picture later became . . .