Betty was born in Croydon on 29/08/1914, the daughter of Charles Bertram and Alice Ethel James, nee Willis. Charles was an accountant and the family moved to Lewes between 1916 and 1924. Charles was a senior partner in accountants and auditors, Knill and James and Co. The company still operates in Lewes today. 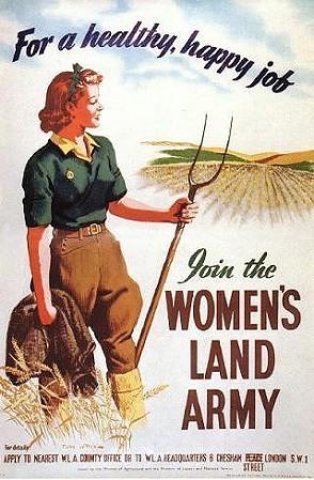 A recruitment poster for the Women’s Land Army

Betty attended the County School for Girls and at the outbreak of WW2 joined the Women’s Land Army. On the 1939 register her family were listed as living at 9 Southdown Avenue.
Her elder brother Bertram, an accountant, was married and living in Malling Down, her elder sister Ivy was the manageress of the Barcombe Place Hotel in Chailey. Her sister Margaret was a riding instructress and later a member of the WAAFs, and still living at home with her younger brother Peter. He later joined the Royal Navy.
Both Bertram and Peter were ARP wardens, and her father was prominent in the Home Guard.

Records for the Women’s Land Army were not kept after the war so in most cases it is difficult to find out what the girls were doing and where they were. Sadly, in Betty’s case, we know exactly where she was and what she was doing.

On the 1939 register she was listed as a Land Girl, and living at Bromlye Farm in Chailey, working for Charles Botting. There seems to have been one other Land Girl there as well. For those unfamiliar with the concept of Land Girls, this was a civilian initiative which placed girls on farms that needed workers, thus releasing men to fight. The farmers became their employers.

Towards the end of 1940 Betty moved to Shorlands or Sharlands Farm at Blackboys. Several other Land Girls worked there as well. While operating a chaff cutting machine on 07/02/1942 she apparently fell, or was pulled into the machine by her clothing. The machine had no guard. Her injuries were horrific. She was taken to the Uckfield hospital but died there a week later.

The inquest into her death was rigorous. Full details of her injuries, and the actions of the doctor who was called to the farm, were given, and printed in the local paper. Betty had started fitting while being examined by the doctor at the farm and lost consciousness, which she never regained.
Expert witnesses suggested that the chaff cutter should have been fitted with a guard but there was nowhere to fit one. A verdict of accidental death was returned. The coroner said that her death ‘was as much due to the war as if she was fighting.’

Betty’s funeral was held at St John sub Castro although she was not buried there, as has been suggested by others. Her funeral was high profile and was very well attended, not only by friends and family, but by her previous employers and colleagues of her father’s. The Mayor and Mayoress attended, with the Mayor reading the lesson. High ranking representatives of the Land Army also attended. Her coffin passed through a guard of honour of Land Girls as it entered the church.

Betty is remembered by name on the St John sub Castro Memorial as well as the Lewes War Memorial.