Bernard was born in Lewes on 17/08/1898 while his parents Levi and Alice Francis were living in Sun Street. Shortly afterwards they moved to 16 Talbot Terrace where they remained. Levi had been born in Rotherfield in 1848 while Alice, nee Piper, was a Lewes native born in 1855.

Bernard was the youngest of six children born to the couple but sadly their only other son and a daughter died, both aged just four, before Bernard was born. Levi spent all his working life working for the Corporation as a pavier. Alice died in 1910 when Bernard was still at school, but at this stage it is not known where he went to school. Given that they lived in Talbot Terrace the Pells School is a likely candidate, but this is not confirmed.

When he left school Bernard started working for the Corporation as a labourer. While the Francis family lived within the parish they probably did not attend St John sub Castro, as when he enrolled in the Royal Marines Bernard said that he was a Congregationalist.

Bernard enrolled in the Royal Marine Artillery in Brighton on 09/09/1915 just 23 days after his 17th birthday and was numbered 14710. While technically he was underage he was accepted as a private and is listed on his Marine papers as a supernumerary – that is he was attached to but not officially on the strength of the Royal Marines.
He attended gunnery school in March 1916 and was made up to Gunner in April. He was transferred to HMS Lion on her return to Portsmouth for repairs following severe damage at the Battle of Jutland.
After this, much of her service was patrolling in the North Sea and she was transferred to the reserves in 1920. In 02/06/1920 Bernard was appointed to the 8th Royal Marine Battalion as a member of the Ballinacurra Company of Midleton Battery Cork, Number 1 Brigade. They were based at East Ferry Coastguard Station, County Cork. 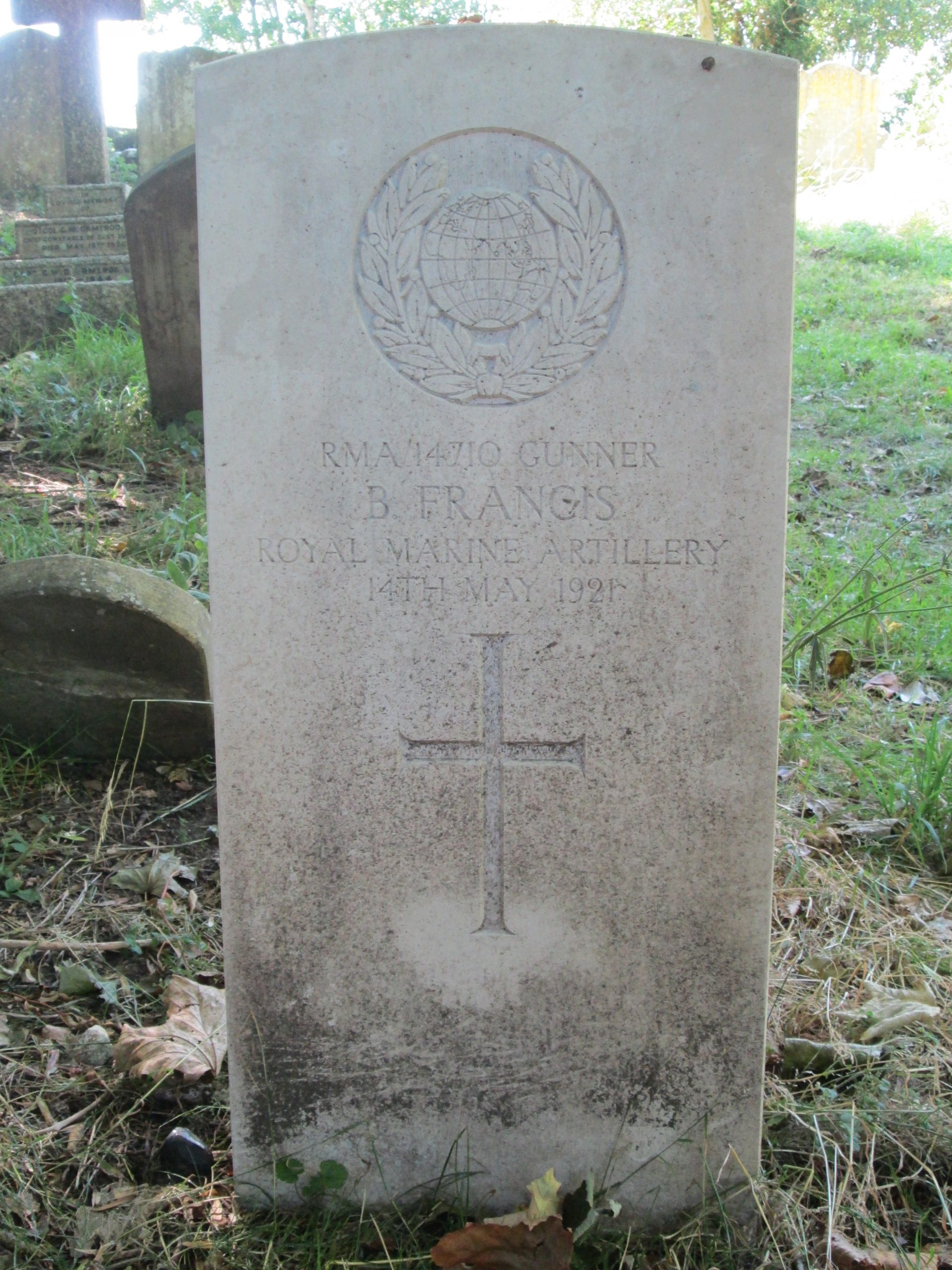 This was at the height of the fighting for Irish Independence and the IRA had issued orders that any men in British Military Uniform were to be shot on sight, whether they were armed or not. Bernard had been in Ireland for nearly a year when on Saturday 14/05/1921, while walking with a colleague, he was abducted and shot by the IRA. His body, and that of his colleague, was dumped in a quarry.

Bernard’s body was returned to his father in Lewes and he was buried in the churchyard of St John sub Castro, close to Geoffrey Hotblack, on Friday 20/05/1921. In a full military funeral his coffin was draped in the Union Jack and pulled to the churchyard on a gun carriage. Men from the RFA at Preston Barracks fired a salute over his grave.

As his death occurred while in the service of his country the CWGC recognise his grave as a war grave and he has a CWGC headstone.