Geoffrey was born in Norwich on 23/09/1900 and baptised at St Augustine, Norwich on 28/10/1900. His father, Frederick Mill Hotblack was described in the baptismal register as a manufacturer. The family were living at 87 Newmarket Road, Norwich and on the 1911 census Frederick was said to be a wholesale clothier. Geoffrey’s mother was Mary Elliott Allnutt. She had been born in Windsor. Geoffrey was the youngest of five children and had three brothers and a sister. All his brothers had distinguished careers in the army with his eldest brother, Frederick jnr., being a member of the Intelligence Corps during WW1. He and the next younger brother were both awarded the MC for their service during the war.

The family were listed on the 1911 census still living in Norwich but Frederick snr had already become the chairman of Kidd and Hotblack Brewers in Brighton. The business was established at the Cannon Brewery of Russell Street in 1906. The family moved to Lewes in 1912 living at Rocklands, 29 The Avenue. Geoffrey attended Brighton College and the Royal Military College at Sandhurst. He was gazetted in the London gazette of 23/01/1920 as a 2nd Lieutenant of the Essex Regiment as from 17/12/1919. His first appointment was to Ireland. In the report of the arrest of an IRA man in December 1920 it was noted that Geoffrey had a pronounced stutter.

On 19/03/1921 Geoffrey was injured and later died in the Crossbarry Ambush, (click the link for details), one of the largest battles of the Irish War of Independence. Reports of the event are confused and the inquest conducted at the Cork Barracks just two days later simply records how the men died but does not analyse the ambush. During interrogation of an IRA prisoner the British forces discovered that an IRA Brigade had recently returned to the Cork area and were headquartered at Ballymurphy. A group of nearly 1000 British soldiers were sent to surround and capture an expected 100 IRA men. Lorries and men advanced but the IRA commander had been alerted by the sound and lights of the lorries and realised that one of the columns was well ahead of the rest. He set an ambush at a rural crossroads at Crossbarry.

The first column, led by Lt Tower, who had been commissioned just three months before, was caught unawares, taking significant casualties from crossfire. Lt Towner was seriously injured. Two further units converged on the area but without success. It was probably one of these that was led by Geoffrey. It was reported that he was injured by a gunshot to the spine while leading his platoon and rescued from the scene by a sergeant, dying in the military hospital at Cork the following day. The inquest simply recorded that he died from shock following a gunshot wound. The IRA Brigade was able to escape the scene with minimal casualties having killed seven soldiers and injured six. A further three soldiers later died. Not included in these numbers are the civilian dead. The whole battle had lasted less than an hour. 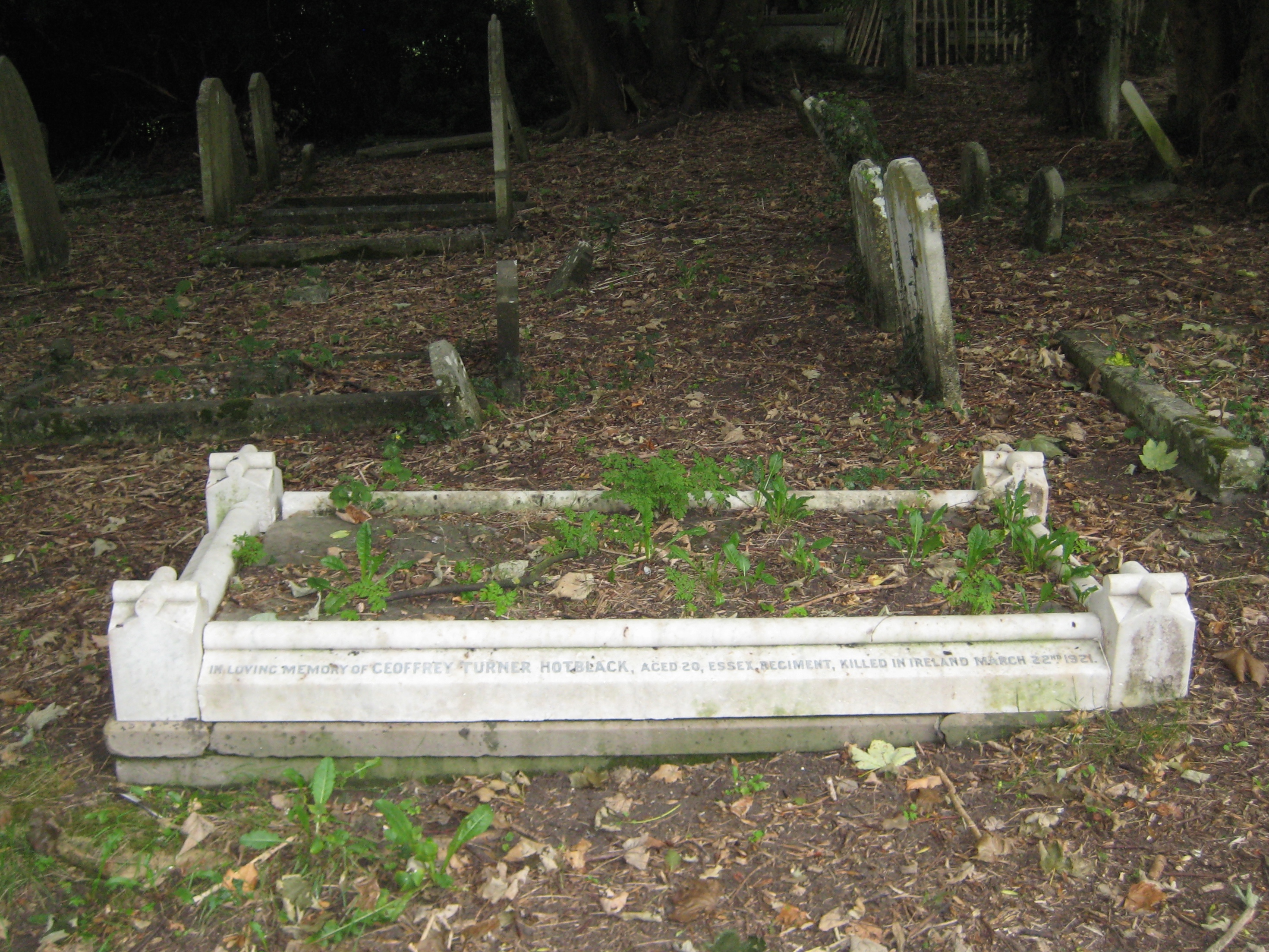 Geoffrey was brought back to Lewes and buried with full military honours in a family grave in the churchyard of St John sub Castro. As a serving officer his grave is recognised as a war grave by the CWGC but as it is a family grave it does not have a CWGC headstone.