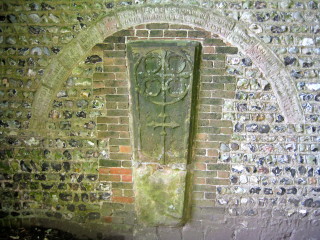 This picture shows the Magnus Monument, which is set into the East wall of the present church.
It commemorates an Anchorite whose cell is believed to have been connected to the Chancel of the medieval church by a doorway, above which were set 15 stones arranged in a semicircle with an inscription in Latin which translates as follows:

HERE IS ENCLOSED A KNIGHT OF THE ROYAL FAMILY OF DENMARK WHOSE NAME, MAGNUS, INDICATES HIS ROYAL LINEAGE. RELINQUISHING HIS GREATNESS HE ASSUMES THE DEPORTMENT OF A LAMB AND EXCHANGES FOR A LIFE OF AMBITION THAT OF A LOWLY ANCHORITE.

By 1587 the Chancel was in such a dilapidated state that it was pulled down, but the inscribed stones were saved and reset into the south wall of the Nave, as can be seen from prints of the church at that time.
When the church was finally demolished in 1839, the stones were again saved and built into the present church on the liturgical east wall of the vestry