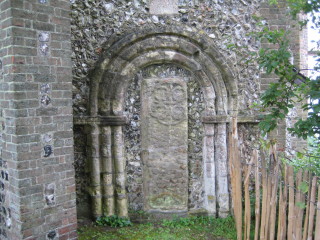 The Saxon doorway from the old church
Stuart Billington

This can be seen from the churchyard, built into the liturgical east wall of the organ vestry.
Although much repaired over the centuries, sufficient remains to prove that it possesses the same general character as the early portion of Sompting and other churches which are regarded as specimens of Anglo-Saxon architecture.