3 ST JOHN'S UNDER THE CROFTS FAMILY 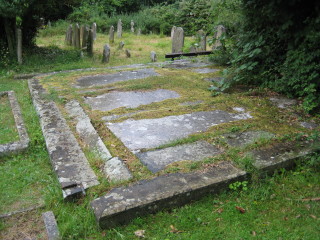 In the mid-eighteenth century a family came on the scene who were to have a great impact on St John’s. John Crofts, a lawyer of Lincoln’s Inn, in 1740 purchased (as could be done in those days) the ‘advowson’ or right as Patron to appoint the Rector of the church. He then chose his brother-in-law, Daniel Le Pla, as Rector.

John Crofts subsequently made a number of gifts to the church, Including a huge 16th century Flemish painting by Frans Floris from about 1553-4 of Jesus blessing the children. This painting apparently hung over the Communion Table in the old church.  John Crofts seems to have come into possession of it as executor to Mrs Powlett of Halnaker House near Chichester. It is said to have been gained by her husband, Captain Powlett, as a prize in a naval engagement.

When Daniel Le Pla died, in 1774, John Crofts put in his own son, Peter Guerin Crofts, as Rector. Under Peter Guerin Crofts the Elder (as we must call in, to distinguish him from his son who also later became Rector), further repairs and alterations took place in 1779 – a ‘destructive reparation’, we are told, from which ‘brasses, stained glass and anything moveable’ suffered. The Rector, however, described how he had ‘beautified’ the church! A new entrance was made through the tower, and the old Saxon doorway was stopped up. Inside its arch, was placed, on end, a 13th century stone coffin lid which was found with a number of others during the alterations.

After 10 years as Rector Peter Guerin Crofts died, at the age of thirty-nine. His eldest son, only ten years old at the time, had identical names. Fifteen years after his father’s death, in 1799, Peter Guerin Crofts the Younger was himself appointed Rector – at the age of twenty-five and, unusually for an incumbency, only about one year after his ordination. He was to remain forty-eight years, the longest of any Rector. He married into the wealthy Campion family of Danny, near Hurstpierpoint, and eventually bought Malling House (the present Sussex Police headquarters) as his Rectory.

Click The Story of St John sub Castro Church to see the complete story in one post, together with Sources, Bibliographical notes and List of Rectors.