The Rectors of the Parish 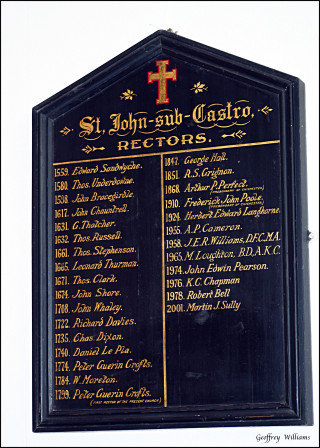 Former Rectors of the parish dating from 1597 are recorded on a board in the porch, photographed here. Information prior to this date is limited and will be the subject of ongoing research.
However, the following is noted in L.S.Davey’s History of St John sub Castro:

The first Rector of whom we have any record, achieved very unenviable notoriety.
In the Patent Role of 1396-7 appears a Notice of Sacrilege in Hamsey Church by William, Parson of St John sub Castro of Lewes, and others.
They were charged with going by night into the parish of Hammyesay, and on the highway at a place called Le Wyke, they took William Payn of Balderden who was riding there and robbed him of 10s in silver.
On the same night he (William the parson) entered the close of John Pyecombe in Hammys, put a ladder to the window of the house and broke it with the intention of stealing the goods, but fled on an outcry being raised by Pyecombe’s wife and the arrival of neighbours.
He stole a chalice belonging to the parishioners, worth 30s., out of the church.
He also entered the house of Henry Brigge in the parish of St Nicholas, Lewes, and stole a brass pot, 16 tin vessels, 3 bushels of wheat malt and 6 bushels of barley malt, and in a desert place, called Bobbelegh, and in his own manse he held meetings with unknown persons to plan robberies, for all of which, nevertheless, he obtained the King’s pardon!